Recently there has been a lot of buzz in ISKCON about Lokanath Swami. 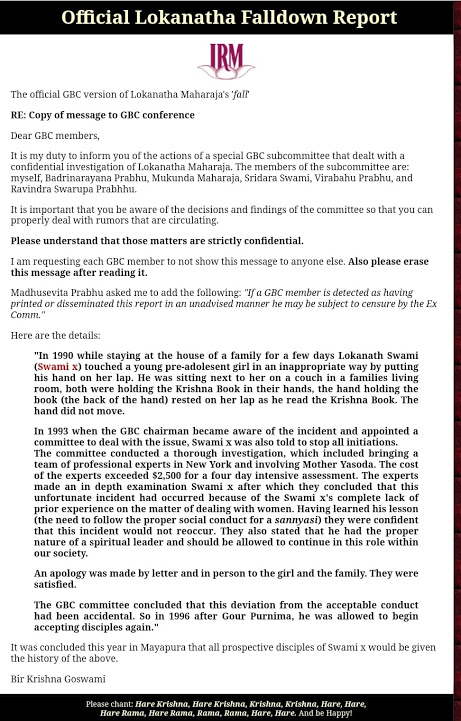 I am the girl that Lokanatha touched inappropriately. It did NOT just happen one time in the living room, on the sofa, but rather throughout the week that he stayed he touched me various times inappropriately. I am surprised now (at age 32) that that NASTY, VILE PEDOPHILE did not try to rape me.

He took my innocent father’s words of “she is growing up here in America, why don’t you teach her some more Indian culture” and turned into his way of taking advantage of me. He called me various times through out that week (it was Easter vacation so I had off), and it was hot, so I was wearing shorts. I was 11 and 1/2 years of age. I sat down next to him after he insisted many times, and he decided he would teach me how to play the harmonium. He several times, rubbed his hand up and down my leg, inner leg, and out, as I was seated there next to him and the harmonium. I asked him “what are you doing?” to which he replied “nothing, just concentrate on the harmonium.” I cannot TELL YOU HOW HORRIFIED AND DIRTY I FELT inside.

Through out the days, he then once woke me up singing “jeeva jago, nidra chadi uttha jeeva” and when I got up ( I was wearing shorts), he patted me on my butt. I ran into my mother’s room, and into her walk in closet and hid, and he came in after me. He pulled me out, saying “why are you hiding” and again touched me on my butt, held my hands and put his arms around me.

Again he called me for harmonium lessons, and then when he touched me inappropriateley AGAIN on my leg, I got up and ran into the kitchen and went to my mother who was cooking prasadam for this ASS. I went to my friend Sangeeta’s home later that day to play, and I told her he disgusts me, I don’t like him, and I don’t like the way he touches me. He makes me feel so dirty. She didn’t know how to react, at age 8, but she said just tell your mother.

The next day, he called me in the living room, and asked me to bring the Krsna book and read it to him. He had me sit RIGHT NEXT TO HIM, leaving no space between us. He PLACED HIS HANDS ON MY CROTCH, NOT ON MY LAP, and said I am keeping the book from touching you there, so just keep reading. He kept his hand there, and any time my mother would walk by the room,he would QUICKLY REMOVE HIS HAND AND PLACE IT ABOVE MY HEAD (around me). He did this several times throughout the course of an hour, and after that sick feeling inside me became the most prominent thing for me, I told him I was tired, and I left the room.

The day after that, some of his bogus followers were there at our house, and when I came inside from playing with my friend (having a dirty feeling inside me the whole time), the ASS had a nerve to call me several times to sit next to HIM in front of everybody. I told him NO!, and ran away.

Thank GOODNESS the nasty pedophile left the day after, and when my dad suggested I touch his most UNHOLY DISGUSTING FEET I SAID NO! I will not. I told my mother about everything the night before, and she was shocked, disgusted and appaulled at everything.

What could a defenseless 11 year old child do? Just say no, and tell her mother. There was no legal actions that I knew of at the time that I could take. If I had known how to kick that ASS in his groins to teach him a good lesson, I would have. But I didn’t know at the time what to do.

His stupid misled followers still blindly followed him, and accused me of lying.

I will never forget what I have been through.. Till this day, Ravindra Swarupa, the head of our nearest temple, acts like nothing happened, and was nonchallant about the whole thing. He has always had a cold, DISRESPECTFUL approach towards our family. We trusted him, and he nor the GBC (garbage committee) never followed through. BUT THAT IS OK, THE LAW OF KARMA AND LORD SHRI KRISHNA WILL. That is who THEY will have to answer to ultimately.

PLEASE POST THIS TO YOUR WEBSITE. I have remained quiet long enough. I will not be quiet any longer.

From: kuladridas@gmail.com
Date: Sat, May 8, 2021 at 11:30 AM
Subject: Lokanath Swami case to ICPO
To: naleadergroup@googlegroups.com

Please accept our respectful obeisances. All glories to Srila Prabhupada

There has been a great deal of recent discussion on the Internet and social
media about Lokanath Swami, regarding an incident of sexual abuse of a
minor that occurred in the Eastern United States in back in1990. The North
American GBC felt that the international GBC Body made a good faith effort
at the time to investigate and respond to this case of child sexual abuse
and placed some restrictions and mandates in place over his activities.
Later, in 1998, when the Child Protection Office (CPO) office was
established, the GBC Body felt that since Lokanath Swami had gone through a
previous investigation, there was no need for the CPO to reexamine his
case. In addition, due to the legal concept of double jeopardy, a person is
not “adjudicated” repeatedly for the same offense.

However, in retrospect, the North American ISKCON Leadership Council
(composed of NA GBC members and other leaders) now feel that the case needs re-examination because first, the full GBC was not aware of the extent and details of the actual sexual abuse of the eleven-year-old girl. Second, we
feel that, regardless of double jeopardy, it was a serious procedural error
to not have the CPO examine this case. In retrospect, we acknowledge that
it would have been best for the case to have been dealt with by the Child
Protection Office, which is independent from the GBC and other ISKCON
management.

While the case undergoes further investigation and decision, Lokanath
Swami is restricted from coming to North America nor initiating any
aspiring disciples based in North America, including online initiations.
Lokanatha Swami has agreed to comply with these conditions.
Further we recommend to the GBC Body and the Executive Committee, that
Lokanath Swami be suspended from further initiations globally until his
case is resolved by the CPO.
Finally, we apologize for any lack of vigilance or follow through with this
case, which did occur in North America. There was undoubtedly great trauma,
hurt, and confusion to the young girl and her family, that should never be
caused by the actions of a trusted spiritual leader. Over the last 30
years, the ISKCON Society, the world in general, and we as individuals have
developed a deeper and more nuanced understanding of the nature of the
great harm caused by child abuse. The North American GBC and North American
ISKCON Leadership Council members remain committed to the vital cause of
child protection and considers child abuse to be Vaishnava aparadha. We
will continue to strive to eradicate child abuse from our ISKCON Society.

Badrinarayan Swami was not on the calls to discuss the Lokanath Swami case
and did not sign the letter. He chose to personally write to Lokanath Swami
and urge him to resign.

Resolution Adopted Unanimously by the ICC on Lokanath Swami
[The ICC – “Indian Continental Committee”, is the body of ISKCON India temple presidents, and managers of preaching centers and extension centers].
Whereas, the ICC has taken cognizance of the recent GBC action against Lokanath Swami,
Whereas, the ICC feels that the decision taken by the GBC, suspending Lokanath Maharaj from initiating, etc., was taken in extreme haste without due consideration causing extreme mental anguish to Lokanath Maharaj and his many disciples and amongst ISKCON’s vast congregation around the world,
Whereas, the decision of the GBC regarding Lokanath Swami will have far-reaching effects both in ISKCON India, and amongst ISKCON devotees worldwide, and is liable to have disastrously adverse effects on the image of ISKCON worldwide,
Therefore it is resolved that the ICC (ISKCON India leadership) hereby expresses their full support to Lokanath Swami and demands that the GBC reverse their unfair decisions.
Also, the ICC calls on the Bureau to take up the case with the GBC, with a view to reverse this injustice and tender an apology to Lokanath Swami.

Welcome to ISKCON, where a guru molests a little girl, gets away with it for decades, and when one group of members in the organization finally decide to do something about it, another bandwagon appears to halt them.

This is why I am never ever going back to ISKCON again.